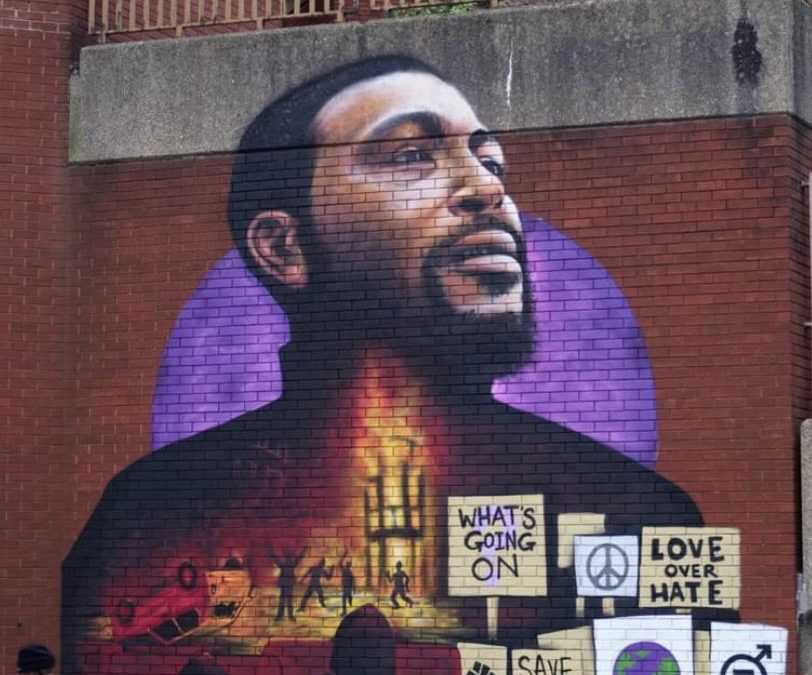 Dreph’s notoriety takes root in 2017 after project ‘You Are Enough’ was exhibited across galleries in London, featuring portraits of Black women as an homage to friends, family and the community. A mural painted on the set of the Eastender’s UK soap hit headlines in 2020 and made artist Dreph, otherwise born as Neequaye Dreph Dsane, infamously known for stunning murals that highlight social injustices and racial inequality.

One of Dreph’s most recent works is dedicated to Marvin Gaye and his song, “What’s going on?”. The song is vibrant with blues and jazz, yet feels mellow from the soft tap of piano keys and soothing vocals. The lyrics completely juxtapose the light-hearted appeal of the melody, lines such as “don’t punish me with brutality” highlighting a history of police brutality and violence against prejudiced communities. In some ways, Gaye’s song is considered either a song of ‘protest’ or of ‘love and understanding’. Either way, Dreph takes this song and interprets it in current contexts – it can either raise eyebrows and inflict hate or can be a boost of morale to the community – akin to Gaye’s song.

Painted in Brixton, Dreph’s mural is of extreme significance to historical events that took place. On 1st June 2020, several hundred people took protest through the streets of Brixton as a sign of solidarity against racism around the globe; initially sparked by the murder of George Floyd in the USA. One of Brixton’s most notable historical events in relation to the Black Lives Matter movement was the 1981 Brixton Riots, which was caused by a number of factors, including but not limited to police violence, racial inequality and economic deprivation.

Dreph’s work is not restrained by politics, rather, it feels as though the artist takes free reign in regard to his inspirations and choice of subject. Reverting back to the Brixton mural, it is a great instance of the spheres where art, politics and socialism meet in a context that reflects the past and present.